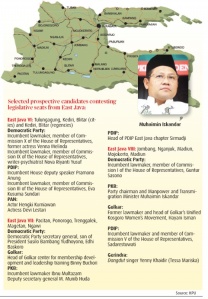 Life is all about choices and Indonesians will have a chance to decide in next year’s legislative election on who should make rules for them.

In the last elections for representatives in the local and provincial councils as well as the national parliament, many voters made questionable choices, judging from the track record of the country’s lawmakers.

The Constitutional Court has received many judicial reviews for flawed laws. Elected councilors have also produced hundreds of discriminative bylaws that have been blamed, among other things, on councilors’ legal incompetence.

Meanwhile, the Home Ministry reported that some 3,000 legislative councilors and House of Representatives members were implicated in legal cases, around 1,000 of them in graft cases.

Indonesian Parliament Watch (Formappi) head Sebastian Salang said that it was difficult to rely on voters to do research and pick the right candidate.

To push people to take care about who represents them is hard as they don’t feel any benefit from having legislators, he said.

Sebastian says the General Election Commission (KPU) shares the blame, as they list candidates without any explanation. “In the end [voters] tend to choose people that they’re familiar with such as celebrities, who they have seen on television,” he said.

But Priska Siagian from the Send Books Movement (GKB), a civil movement that sends books to legislators as a critique to use common sense and better references in their work, said she believes that there are smart voters out there, who want smart representatives.

Priska herself says she seeks potential representatives with a similar vision to hers. “Because for five years after they are sworn into office all our political and legal matters will be represented by these legislators,” she said.

Priska said that the Internet helps her track the record of prospective candidates in her electoral district. After checking their track record she would scrutinize the candidate list. “The good thing is in this digital era, [we can] find information on people, especially legislative candidates.”

Ika Karlina Idris, a Jakarta-based-voter, said she was guilty of not doing research for the last legislative election. She said she only found out the names of the candidates when she opened the ballot paper in the voting booth. But this year, Ika said she wanted to scrutinize each candidate in her election commentary blog gosippemilu.org.

The Election Commission has posted on their website kpu.go.id the prospective legislative candidate list (DCS) from the 12 parties contesting the elections. The website also has the maps of each province’s electoral district. There will be 77 electoral districts (dapil) for the 2014 election. Some Regional Election Commissions (KPUD), such as the West Java KPUD, have posted the DCS for the provincial and regional councils.

Voters can check which dapil they should vote in according to their residence, listed on their ID card. For example, those with an ID based in Bandung would vote in dapil West Java I. Those living in East Jakarta would vote in Jakarta I. A Surabaya resident would vote in East Java III.

After finding one’s dapil, a voter can start checking the nominated legislative candidates for the respective regency or municipality, provincial councils and the House of Representatives.

For example, the choices for residents of West and North Jakarta, as well as the Seribu Islands ( DKI III), will include current House speaker Marzuki Alie from the Democratic Party, who suggested women in the House to be banned from wearing miniskirts to save them from sexual harassment; retired policeman Adang Daradjatun of the Prosperous Justice Party (PKS), who failed in his bid for Jakarta governor in 2007 and whose wife has been implicated in a graft case; the son of business tycoon and Great Indonesia Movement (Gerindra) Party Hashim Djojohadikusumo, Aryo P.S. Djojohadikusumo, also the nephew of the party’s presidential candidate, former Special Forces (Kopassus) chief Prabowo Subianto; former athlete and newsman Richard Sambera from the Indonesia Democratic Party of Struggle (PDI-P), incumbent legislator and former TV presenter Tantowi Yahya from Golkar, and the secretary general of a hardline religious group Islamic Peoples Forum (FUI) Muhammad Alkhathkhath, from the Crescent Star Party (PBB).